Denise and I engaged a taxi and started downtown to the shopping mall last Monday, intending to satisfy an oft felt craving for some comfort food. There’s a Pizza Hut located there, with a special priced menu item available at lunch that meets the comfort standard, and at about $5.00 per person appeals to my long nurtured sense of thriftiness.

We left the apartment about 12:30, in the midst of one of the four daily rush hour periods. Most children return home at lunch, and a significant number of businesses close from about 12:00 until 2:00, thus creating a situation similar to returning home late in the afternoon. Return home drive-time (bus or walk time here) is more like 6:00 to 7:00 p.m. Regardless, during each of these four time periods, the streets are pretty congested in Fes. 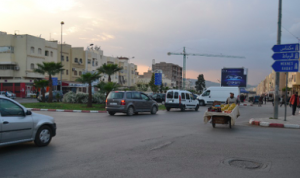 No more than a quarter mile after leaving we found ourselves sitting dead still in the taxi, with increasing evidence of some sort of traffic condition creating a lot of confusion. We inferred that from the increasing noise level created by the simultaneous blowing of numerous automobile horns. Gradually we inched our way toward the large roundabout, maybe two tenths of a mile in front of us. There are five roads that intersect here including the large four (or five or six) lane boulevard and an additional lane that is a sort of service road to a shopping area. 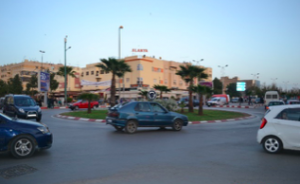 As more and more cars attempted to gain an advantage over those surrounding them, we thought for sure we were headed for our first involvement in a traffic accident. The operative “rule of the road” here is that a vehicle positioned to your right any distance at all ahead of you, has the right of way and you are to give way to him. Even a directional change, moving from a lane on your right to one on your left is legitimate. Thus, the objective was to get over to the right if at all possible and trust that it would be the lane that moved most efficiently since the same tactic is utilized in the roundabout.

This particular roundabout has traffic lights, but any notion that drivers would obey the lights was soon forgotten. When we finally arrived at the entrance to the roundabout, we saw the reason for the delay. A truck that delivers bottled propane (butagaz) to the small grocery stores had collided with a van that provides transportation for students to private schools, and had blocked more than half the available area for completing the circle.

As we gradually advanced around the roundabout, maybe three or four feet every thirty seconds, I became concerned about another phenomenon I observed. I mentioned earlier that often there are people at the large intersections that utilize the stoppage of traffic while the traffic lights are red to beg for money. I consider it a real hazard since a number of people are elderly, others are disabled, and sometimes there are mothers with infants in their arms. But just since last summer, a number of squeegee children have arrived. Some are as young as 7 or 8, or so it appears. They have a spray bottle of water and a small squeegee and aggressively begin to clean a windshield. The reaction of many of the drivers is often hostile, particularly when the stress level is high as it was Monday, the result of watching drivers coming at you from several directions and the decibel level from the “klaxons” increasing. Fortunately, we did not see anyone struck by a vehicle, but I increasingly worry about these kids spending their time weaving in and out of winding traffic, breathing those exhaust fumes and dealing with aggressive recipients of their unwanted service. 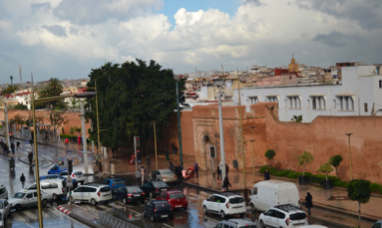 Traffic in Rabat, not a round-about but…

After about 15 or 20 minutes we made it to the other side of the round-about and escaped the congestion and continued down the boulevard. I mentioned to the taxi driver I didn’t see any policemen there investigating the accident or handling the traffic. He responded that they were all at lunch, and gave me a big smile! I guess government servants get no respect in any country. 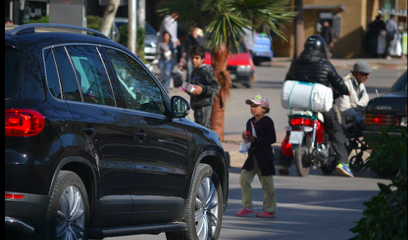 We made it to Pizza Hut and enjoyed a nice lunch and quickly overcame the feeling of impatience we had felt in dealing with the situation we had just experienced. I still worry about those squeegee kids though! 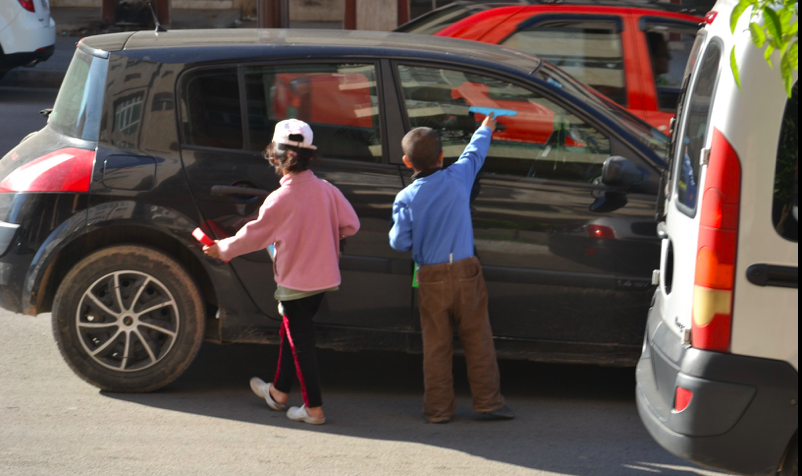