Traveling to nearby tourist sites and visiting in the homes of friends in the Fes area occupied our time the first three days we were in Morocco. The resulting fatigue convinced us that a less demanding agenda was in order before we departed for the desert on Thursday. Wednesday, we still managed to visit in a couple of homes, enjoying some of the local cuisine and
having a more formal late afternoon tea with a family that Robert had met in 1988 in his previous visit. Farid, the father, was quite anxious to visit with him again and renew the memory. For the journey to the desert, we rented a Toyota Landcruiser, along with a driver, to provide transportation for the next five days. We knew that covering the distances we planned to
travel would be a challenge, not to mention dealing with the local “traditions” that make driving there somewhat risky.

We met our driver, Ghalla, at noon and discovered very quickly that he knew very little English. With my rudimentary Arabic and French, in concert with lots of hand signals and body language, we managed to communicate fairly well. Ghalla is a Berber who lives in the town of Imilchil in the Middle Atlas Mountains. Though I have never been there, this town of about 2000 people and located at an altitude of 7000 feet is quite famous for its annual betrothal festival each year. The festival is held after the harvest is complete, and before the winter arrives, bringing snow and very cold temperatures. The celebration is a part of the traditions of the very tribal society that stills exists in the rather remote mountain villages. Approximately 30,000 people, a large number of them tourists on organized tours, attend the three day event. 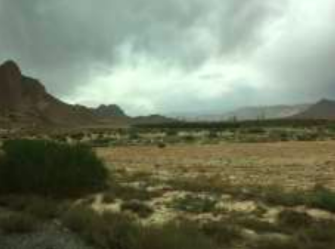 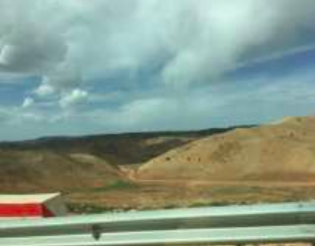 Our first day’s journey would take us to Erfoud, a distance of about 300 miles, with a projected travel time of 61⁄2 hours. We knew there was some rather rugged country to pass through but felt the commitment in time the first day would give us more rest time before we began the travel by camel into the desert Friday afternoon. The desert departure took place in the town of Merzouga, and required another 90 minutes of travel before we arrived at the hotel which arranges for the actual trip into the Sahara. Though a rather tiring travel day we did happen across some interesting places, and enjoyed the stark and impressive mountain scenery. As the pictures indicate, the landscape differs significantly from the cedar forested area around Azrou and Ifrane that we had seen two days earlier. As we passed out of the Middle Atlas into the beginning of the High Atlas Mountains, we began to pick out easily the location of sources of water as the bands of vegetation appeared. One can see the locations of residences and other buildings along the edge of the oases.

In a rather isolated rural area Ghalla stopped the car to let us wander around a bit in a weekly souk that was taking place in what is probably a central location between several villages where accessibility is difficult due to the rugged terrain. As the pictures indicate all sorts of transportation, including walking, are utilized to get to the area where the actual commerce occurs. 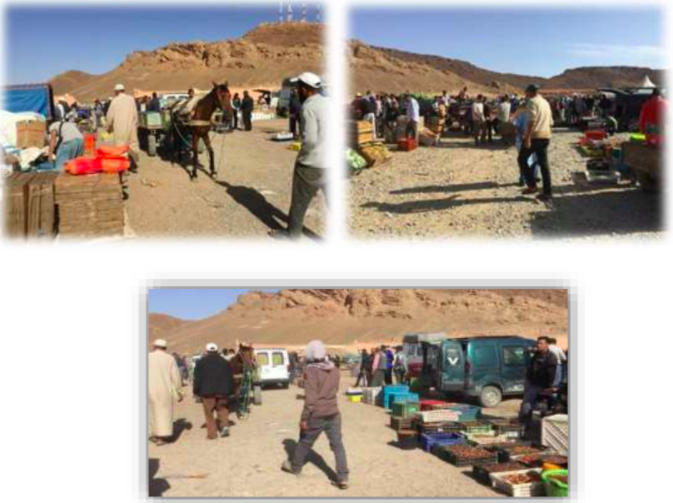 Being near the desert, date palm trees are prolific and October is the prime season for the date harvest. But as this picture shows, there is an abundance of good nutritious food available, and at very reasonable prices. 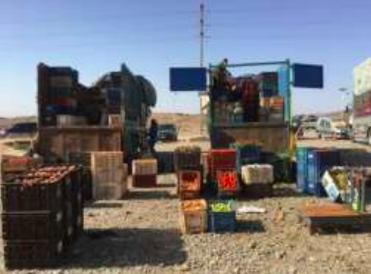 Other than seeing a way of conducting commerce almost unknown in the U.S. at the present time, the souk also gives an interesting view of the way life is ordered in this part of the country. I had little in the way of insight or wisdom to offer my traveling companions as to the why and how business and community affairs are conducted. I suppose it is true that the present situation evolved from an even more basic and mundane lifestyle in bygone eras. Nonetheless, I always enjoy seeing the products of their labor, its display and to observe the style of the various vendors as they attempt to persuade the shoppers to buy. It is a very safe and non-threatening atmosphere, and while we attracted stares from a number of people, the conversations I attempted seemed to always be welcomed.

Just a few miles down the road from the location of the souk we visited, we decided to spend some time at Brahim Tahiri’s Museum of Fossils & Minerals. According to an article in a 2009 edition of the magazine, Aramco World, “fossil and mineral exports expanded so rapidly beginning in the late 1980’s and early 1990’s that today more than 50,000 Moroccans earn their
livelihoods in the fossil and mineral specimen mining and export business.” Today the fossil trade is worth some forty million dollars to Morocco annually. “The Tahiri family enterprise provides work for about 65 fossil-diggers throughout the region, with an additional two dozen workers employed in the family’s fossil-preparation ‘factory’ near Erfoud.”

Shown below are two machines, the first for sawing slabs of the limestone and other material to be transformed into various products. The second is a polisher used to “finish” the artifact and give it a smooth surface.

Here is one of the “gift shops” where various and sundry items can be purchased. 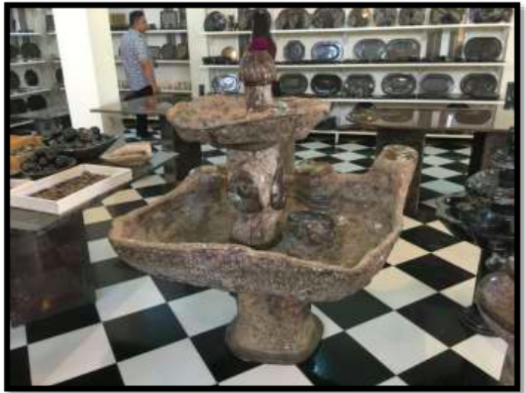 The variety and beauty of the items made from various types of stones and minerals are amazing. 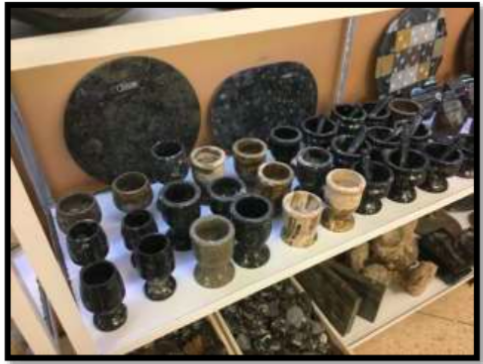 Here we are “negotiating” with one of the employees over prices. 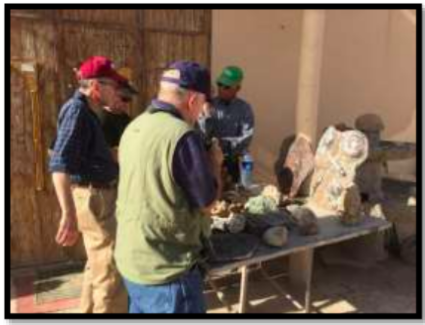 Pictured are several very unusual specimens. The printed information suggests that some of these could be as much as fifty million years old. 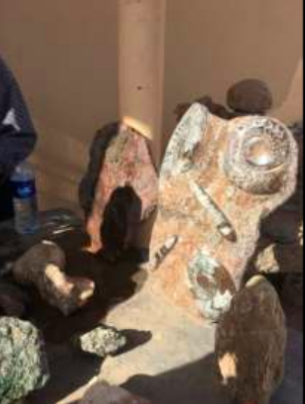 People who know (that would not include me) can recognize some of the prehistoric creatures such as trilobites and chambered nautiluses.

A short drive upon leaving the museum brought us to the town of Merzouga, a Saharan erg, or sand covered dune field, and is the gateway to the desert for thousands of tourists each year. The pictures are the part of the hotel complex from which we left for our night in the desert. We were able to leave our baggage here, return from the desert the next morning for breakfast and a shower before returning and continuing our journey to Ouarzazate and Marrakech.