We checked in at the hotel pictured in the previous report early in the afternoon and spent a couple of hours
resting before we went out to meet the people who would be directing our excursion into the desert. Of course we also wanted to see the camels, and to learn what kind of grouping we would be in as we made our way to the camel bivouac.

The bivouac is a group of tents located approximately an hour and a half trek into the desert. I am uncertain as
to what the distance is, but I would estimate about two miles. It’s plenty far enough for city dudes like us who have not been spending any time riding horses, or even bicycles for that matter. Seeing the tents and arriving at our destination was a welcome sight. 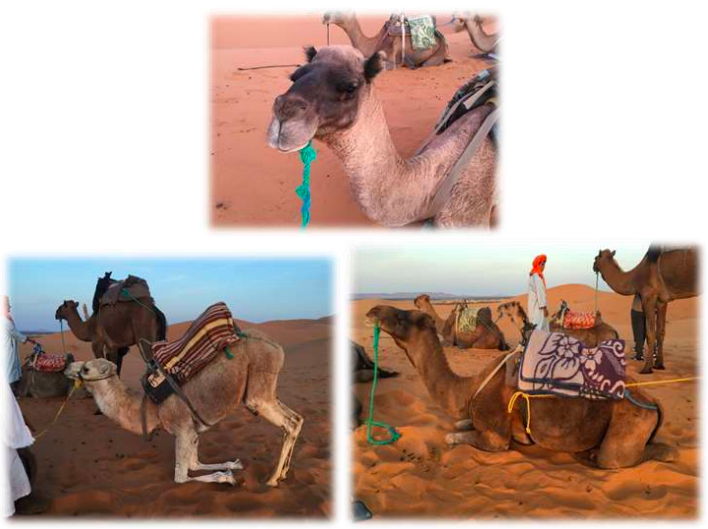 We discovered that although 15 or 20 people were waiting around to take a similar trip into the desert like us
that we were being “managed” as one group of four. We had our own guide and he introduced us to the four camels we would be riding. Assigning Tim to the first, me to the second, Mark to the third, and Bob to the fourth, each camel was attached to the one it followed with a lead rope of 10 or 12 feet. The guide had a rope attached to Tim’s lead camel of similar length and he walked that distance in front of him, slowing down at appropriate times as we approached a basin of sand in one of the dunes or started up an incline. The camel saddle is not particularly comfortable, there are no stirrups, and the hand-hold is an iron T-bar that is attached to the saddle and is 8 or 10 inches above the place where it is attached.

The gait of the camel is pretty much as stereotyped in cartoons and music, the rhythm being something of a
loping walk, with the camel often having to take an extra short step to get better footing in the sand. I am happy to report that all of us managed to make the trip out and back without falling off, and without embarrassing ourselves too much in getting off and on the camel saddle. By far, the most precarious part of that exercise is when the camel stands up after mounting, and lies down before the rider dismounts. 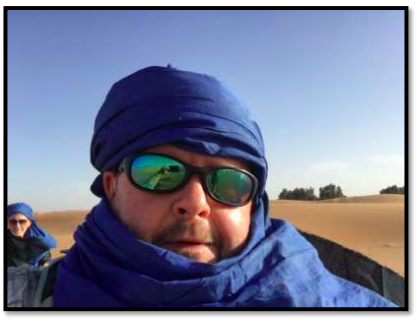 Here is a selfie of Mark, Bob in background after we had put on head scarves to protect us from the sun on the trip into the desert. Below is a selfie Tim made which show the other three riders following. Beside it is our barefoot guide.

The desert is an incredible experience. The vastness and the grandeur of the dunes is stunning. Within 20 or 30
minutes after leaving the hotel there is a sense of being unknown, and a recognition of how really small we are as
individuals. The guide seemed to have no difficulty in remembering exactly where we needed to go, and all the turns and changes in direction seemed to be correct. To me, it all looked radically similar, and I would have been hard pressed to even suggest the direction we need to take when we started the return trip.

As the wind blows, the crest on the dunes as in this picture here is constantly changing. The undulations of the sand appear to be the creation of a graph of a higher degree curve, drawn with precision and without hesitation. Notice the edge of the “bowl” in the picture. 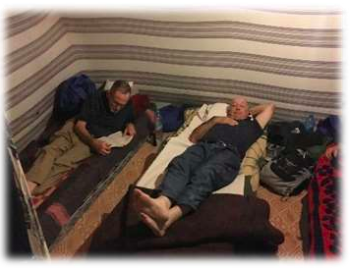 We reached the bivouac area with about an hour of
daylight left. We looked around at the provisions made for
us, inspected the tent reserved for the four of us, and chose
the location of the 2 inch foam mattress that lay on the
sand and would serve as our mattress.

Before going to bed we were served a hot meal provided
by the three or four crew members who accompanied us.
The meal was prepared before we left and simply reheated
once we arrived at the bivouac. We ate in a common area
within a circle of several tents; there were about 8 or 10
additional guests of the hotel who made the excursion.
After the meal we were provided with some entertainment
by a small troupe of Saharaoui Berbers who sang the folk music and demonstrated the dance of their local tribe. It was interesting but their repertoire seemed to be a little thin. I actually decided to depart before the music ended in order to engage in a bit of star gazing.

When Denise and I made a similar trip in 2011, we had the unusual experience of a thunderstorm about the time
we arrived at the tent. Furthermore, the clouds eclipsed one of the advertised attractions of being in the desert: the chance to observe the stars without the light pollution that is often the case in a more populated environment. This year was much different! For the first time in my life, I really saw the Milky Way. The band of uncountable stars across the middle of the sky was an awe-inspiring natural phenomenon that I felt very fortunate to see. The solitude and silence were intensely moving. I sat there for about 45 minutes, genuinely enjoying a very unique experience of contemplation and reflection. I realized why many people consider spending time in the desert in a quest for greater spirituality. For me the notion that a Creator of the limitless cosmos I viewed and the serene peace I felt, confirmed that the God of the universe was right there present with me, in a real and steadfast way. Gratitude appeared as the overriding emotion I felt knowing that I was loved and accepted.

Much too early it seemed, about 6:00 a.m., the handlers were rousting us to get ready to return to the hotel. It was still pretty cool, but we had brought jackets and were adequately prepared. Within a half hour or so we experiencing the sunrise from the backs of our camels.

Though the second picture appears to be the famous magi, there was some question, given our location and
circumstance, whether or not a wise man could be found among the four.

We made it back to the hotel where we were able to shower and enjoy a nice breakfast provided for us.
We had completed the southern exposure of our trip. There were still many miles to cover, and within a
couple of hours we were headed northward, ready to traverse the High Atlas Mountains as we made our way
towards the cities of Ouarzazate and Marrakech. We knew there was more beautiful scenery and three more
days of enjoyable familial fellowship.