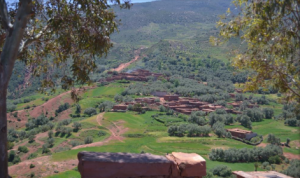 Friday and Saturday provided unique, inspirational experiences that made the frustration and fatigue we encountered in route to Casablanca seem as little more than minor annoyances. We traveled to a place we had never been, became friends with people we had never known, and participated in meaningful activities completely foreign to our 45 year history in North Africa.

The family with whom we became friends live in the small town of between Marrakech and Ouarzazate, let’s call it 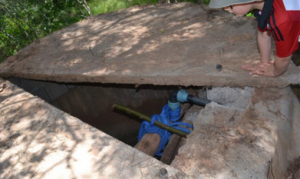 Mayberry. Referred to as a “rural commune” in the tour guides, the small town has a population of approximately 11,500 people and is located about 50 kilometers south of Marrakech, the fourth largest city in the country. Because of our delayed arrival in Casablanca, we decided to depart for Marrakech at 11:30 am. The duration of the train trip between the two cities is about four hours. Traveling with us in addition to Rosemary who joined us in Atlanta, were two former colleagues of Rosemary at an American school in Casablanca. They taught together for several years about ten years ago.

The specific event drawing us to two villages of the High Atlas Mountains involves the work of the family living in Mayberry. John is a civil engineer, born in South Africa, but raised in London. His wife is a physician from Louisiana. A truly international couple, they met in Zimbabwe when both were engaged in community development projects. They have three children and due to their remote location, part of their activity is home-schooling their children.

For the past ten years, they have lived in Mayberry and worked on water projects, primarily drilling community wells, with 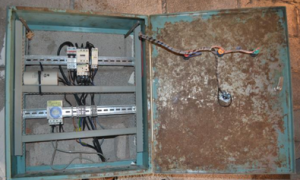 the goal of providing access to running water in all the homes of the village. Their achievement is more than admirable, as they have completed sixty different projects in the time they have been part of their success can be attributed to the partnership that is forged between the people who will benefit from the completion of the project, and the team providing the direction for the construction. Most of the direction comes from John and his Moroccan employee Mohamed. Prior to beginning any project, meetings occur between the leaders of the village and John. An agreement must be signed obligating the members of the village to provide a certain amount of “sweat equity,” one might say. The villagers are responsible for digging all the trenches and the other manual labor required such as helping to carry the material that is needed to its desired location, not an insignificant task in terrain that involves a difference in elevation of several hundred meters from well-site to the location of the water tower. 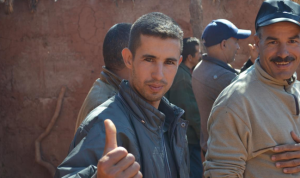 Additionally, each household is responsible for providing the funds required for “finished installation.” Those costs include the price of the pipe that runs from the main pipe to the individual houses, and the cost of spigots and other required hardware. For most houses this cost fall within the $30.00 to $40.00 range. Though few families within the village have that sort of discretionary income, most have at least one member engaged in viable employment, perhaps in Marrakesh, or some form of agricultural income such as olives or sheep. Evidently, there is a lot of sharing in terms of helping each family ensure they can raise the requisite amount to enjoy the benefits of the water in their home.

The two villages we visited had always had to rely on a source for all their water a considerable distance away. There is no creek or river nearby that reduced their dependence on transported water such as drinking water for animals or washing 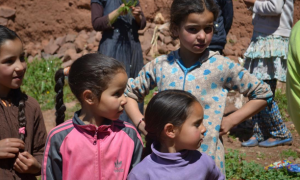 clothes. The nearest source required about 90 minutes round-trip by donkey. Generally speaking, children provided most of the labor for transporting the water, which of course meant the time available for school was much less. A priority when John began his work was to drill wells first where the distance from available sources were greatest. His first project involved a village which had a river located near-by, but had to travel 15 kilometers for drinking water.

Rosemary’s husband, Johnny, for many years worked with people in the rural, and underdeveloped areas of Morocco. He had envisioned similar projects and after his untimely death in 2011 from cancer, friends of the Cooks contributed money to fund a well project. Moroccan Encounter, our non-profit, facilitated the collection and distribution of the funds to John. A plaque honoring Johnny’s memory and his love for the people of Morocco had been installed on the water tower after its completion. A small but formal dedication ceremony was held that Saturday morning, the plaque was unveiled, and the people of the village expressed their gratitude to Rosemary for Johnny’s vision and the contributions made by others to bring the projection to completion. Needless to say, it was a very emotional time. 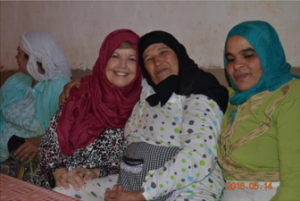 Following the ceremony we were hosted to several hours of continuous hospitality, primarily involving lots of traditional Moroccan food. I shall describe some of the differences between the two villages we observed as well as a little more detail of the day’s activities in the next Perspectives. I chose the title in this report as a result of John describing to Rosemary that the gratitude she should expect was the result of people’s lives being forever changed as a result of the water. He cautioned her not to be surprised by the thanksgiving they expressed since they truly believed a miracle had occurred in their time and place. 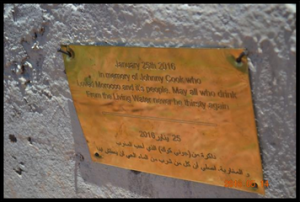 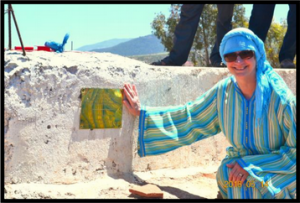